In 2007 got together three friends at the sport camp in Austria Ramsau: Lauri Rannama, the then physiotherapist of the Estonian ski association, Timo Simonlatser, the ski athlete, and Peeter Kümmel, skier-physiotherapist.“ Lauri turned to the two of us and told us that at the World Cup of Skiing in Sapporo, Japan, there had been some exciting things that had caught his eye, the massage chairs,” says Timo.

Lauri described to his friends how he had been in a Sapporo mall for technical things, where dozen of the massage chairs had been tried out leaving him very impressed. “These were something completely different from what any of us had experienced in Estonia or Europe. Lauri pointed out the arguments: that the massage chair is just an interesting machine, but also, for example, time-saving; and then came up with the idea to test them out in Estonia,” reminds Timo.
Both the manufacturer and a handful of interested people were found-and the first order went so fast that the company itself was not even created yet. There were 3-4 different models arriving with a large sea container, including chairs to work on a public surface with coins. “The same massage chairs that arrived to us in the first container are still working and do not show any signs of fatigue. And so even after working ten years in public areas!” Timo happily says. The first home massage chair was bought by Andrus Veerpalu.

The first home massage chair was bought by Andrus Veerpalu.

Since the founders of that time were all in the top sport, the venture was second to the sport at the beginning and had to wait for a long time. “At one point, the athlete’s career is running out. And at one point the massage chair business turned out to be a lifesaver for us. When the health got screwed, a thorough work began with the massage chairs,” recalls Timo. The three of us had enough motivation. “Initially, the goal was still to invest our money in something that we could believe in and of which the market was lacking in,” Lauri admits. For Timo, however, it seemed economically exciting to finally try out the business knowledge acquired at the university.

Development of the field in Estonia and in the world

Within ten years the massage chair business has made a very quick improvement in the entire world. “When we started there was no hands massage functions nor rollers for foot soles. The reach for back massages were short and the rollers moved only up and down in the back rest. But even then, it was new and exciting for people and it felt nice even for us! But today, when I try new chairs, everything has changed so much,” says Timo. A lot of changes occurred when the first L-Track chairs came into the market(Allowing rollers to move over users back, buttocks and thighs), with S-Track chairs ( also allows deep stretching and twisting in the waist area in addition to the massage) at the same time, occurring a qualitative leap.

Long work in the field of massage chairs has provided an opportunity for Estonian people to see and contribute significantly to the development of health awareness. But there is still a long way to go. “Today, usually people who buy our chairs are those whose health has an age, people with forced position work, or those who already have a trace of injuries from an accident. It always comes out from the client’s story that at one point of their lives there has been a back trauma, a car accident, a neck tension… and that is a strong impulse for launching human health’s awareness,” notes Timo.

It always comes out from the client’s story that at one point of their lives there has been a back trauma, a car accident, a neck tension… and that is a strong impulse for launching human health’s awareness.

Today, health awareness has risen, and companies are taking care of providing preventive health services to their employees early on. “Companies understand that healthy employees are happy employees-and often the employee does not feel that he/she should do anything to prevent anything. That is why it is very good that the health care prevention model in is developing through employers in Estonia. That is how in a larger perspective it reaches homes. Because if you work hard with your soul wholly in it, massage is needed at one point,” Timo admits.

All Borealis carefully selected-tested models are manufactured in a Chinese factory considering the 2000 experienced experts’ advice and assistance. “From both excitement and market awareness, we are ordering demo models from other Asian countries every year and we go to fairs with different manufactures. Maybe somewhere else they are done better? However, even if the chair is produced in Taiwan of South Korea, most details still come from China. Even for chairs sold under European brands,” says Timo.

Feedback and success stories from our customers 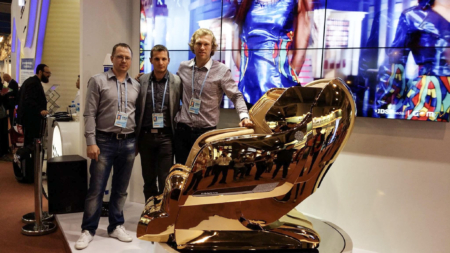 It has already been ten years now that Borealis Massage chairs have healed people’s health in their homes, companies, health institutions as well as in public areas. Ofcouse Peeter, Timo and Lauri use the chairs themselves: for recovery and relaxtion, but also as a part of the physiotherapy offered to their clients. Many success stories can be found among massage chair users.

“An unknown number called me recently. Introducing themselves as a older women from Mulgimaa. And told me how she goes to Tartu to take care of stuff and is up on her legs the whole day, after that she always uses our massage chairs that are in the bus stations before going back to home. Just called to tell us how healthy that has been for her. That was when there was a light feeling in my heart. It is truly wonderful that people can benefit from the things we do.”

In addition to our massage products, Borealis has got a selection of marketed physiotherapy that has been lacking in training and equipment in Estonian market and quality kinesis tapes.

Borealis’ brand GameKing operates the children gaming automates that are in malls and builds gaming set NALI for children’s intelligence and skill development indoors with an ecofriendly set of minds.

You can find Borealis offices and showrooms for examples from Tallinn as well as Tartu: these places made as a three friends’ joint company has now working ten people for them. However, customer trust is crated every day by the existence of a large rental park and the provision of the product and its rental, including maintenance. In business, Timo, Peeter and Lauri work in a solid consensus. “It has gone well for Borealis, because we have understood: our product can be as good as it can be, but the feedback is always given by the customers themselves.”

Since 2016 Borealis has gotten the title of Äripäev’s Gasell Company three years in a row; however, Borealis eye massager has won the Iluguru’s special prize of the Innovative Beauty Product of 2017. Borealis has also helped at rewarding for soprting Estonian companies as well as the Children’s Fund of Tartu University Hospital.